“Iran and Colombia Need to Interact with Each Other,” Says Juan Alfredo Pinto Saavedra.

Juan Alfredo Pinto Saavedra is a seasoned, prominent diplomat, politician and author who has parliamentary membership of his country on his background, and now serves as the Ambassador of the Republic of Colombia to Turkey and Accredited to Iran. As a professor, he teaches economic studies at various Colombian universities and has penned numerous pieces and books. In an interview with Mr. Saavedra, in addition to the importance of bilateral ties between Iran and Colombia, he stresses that the two countries can depict new horizons to expand the mutual relations and that he shall spare no effort in doing so.

Accredited Ambassador of the Republic of Colombia to Iran

Having signed a new peace agreement, Colombia has just initiated a new era in the international context. How has this agreement affected Colombia’s foreign policy? Has the ELN group in Colombia stopped its armed activities?

As the Peace process as the Peace Agreement with its adjustment and implementation and the effort to consolidate the Peace have a positive effect for Colombia and its International Relations. If ELN stops all its terrorist actions and release all the kidnapped people in its power, the Government of Colombia is ready to retake the dialogue process with that group.

During Your Honor’s meeting with President Rouhani, full development of bilateral ties was stressed. How strong a will does Colombia have to seek closer relations with Iran?

Iran and Colombia need to meet each other much more. Only if they meet each other better they both can get greater achievements. This process must be stimulated with Entrepreneurial and Technic direct reciprocal visits.

Through my visits and the workdays of Colombia in Iran as well the Cultural Weeks that our Embassy organized there we have identified some potential cooperation areas such as Nanotechnology, Tourism, Subterranean Waters, Spanish Teaching, Cultural Heritage, Dairy Processing, Film Industry and of course, promotion of trade and investments.

How useful are the agricultural potentials in expanding ties between the two countries?

The trade of Banana could increase so much more. The market of supplies for Processed Food Industry too. The biggest problem is the Payment System because for not being direct the transactions become more expensive and a little uncertain.

Each time we move forward new difficulties appear and therefore it is very hard to increase the total trade exchange.

In the case of Small enterprises and Handcrafts we are interested in small plants of dairy processing and decorative objects. It would be good that Iranian handcrafters prepared a delegation to attend our annual fair ‘Expoartesanias’. Of course I completely in disposal to collaborate with my experience in any space that Iran suggests to cooperate in SME’s. Field as Jewelry, Emeralds, Gold, Fashion and Furniture have great potential, as well as in Agriculture, Colombian Tropical Fruits and Iranian Dry Fruits have it.

Do the two countries have banking relationships?

The difficulties in International Financial and Geopolitical Relations bring adverse consequences for our integration. The regional situations can become complicated and the trade does not work without a clear and extend relation with the Global financial system.

How effectively can the two countries cooperate to fight drug trafficking?

We have convergence in the Drug Enforcement but undoubtfully a major joint action could be developed.

Colombia has made progress in terms of sustainable development and environmental goods. What are the potentials of cooperation in this field?

Colombia is one of the leaders in the road to the Sustainable Development Goals (SDG) and has a prominent institutional structure in environmental field. I already mentioned the Subterranean Waters issue or the applications of nanotechnology in the environmental management of wastes. This is another potential cooperation scenario.

In addition to your political and scientific positions, Your Honor is a renowned literary and cultural figure. What activities do you have in progress to further develop cultural ties between the two countries?

In Cultural and Literary areas last year we did the First Cultural Week of Colombia in Tehran, in which Books donation, Film Festival, Artistic exhibitions and Academic Lectures were carried out. This is the time to do something similar in Colombia and I think that in the Films have a great potential for co-production and joint work. 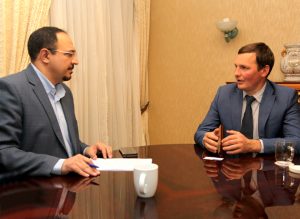