“Rouhani Can Bring Back Stability to the Region,” Believes John Tirman.

John Tirman is a globally-known American theorist and expert of foreign politics who has been the Executive Manager at the International Institute of Technology of Massachusetts (MIT) since 2004. Of among his numerous international works, books and articles we can name his latest coauthored with Iran’s former Deputy FM, Abbas Maleki named “U.S.-Iran Misperceptions: A Dialogue”.

AVA Diplomatic News Website has conducted an exclusive interview with Mr. John Tirman covering aspects of the foreign policies of the United States, Iran’s nuclear case, and Israel’s stance toward a probable Iran-U.S. deal which you shall find below.

How effective can Iran’s nuclear agreement appear on Tehran’s ties with its neighboring states? How much do you believe it can influence Syria’s developments?

A nuclear agreement would have a strong, beneficial, and permanent effect on relations between Iran and the Gulf monarchies. As to Syria, the West and Iran may be able to discuss Syria after the nuclear agreement is concluded, but a solution to the Syrian civil war also requires the participation of Russia.

How have Israel’s disagreements with a peaceful solution to Iran’s nuclear case succeeded thus far?

Israel has enormous influence in the US Congress, and it could block an agreement. The question is how much Obama can do by executive action that cannot be blocked by Congress. I have no doubt that Israel and the Jewish Lobby will try to scuttle a nuclear deal with Iran. They will be particularly hostile after their violations in Gaza.

What has primarily caused Israel to worry over a final Iran-P5+1 agreement?

I have long argued that a nuclear agreement would benefit Israeli security, as it would benefit security in the region as a whole. So I assume Israel’s attempts to destroy a nuclear deal are predicated on politics–i.e., Netanyhu’s need for enemies. The purported “threat” from Iran was a way for Israel to distract from their occupation of Palestine

Why do some Persian-Gulf states fear a nuclear accord between Iran and the West, esp. the prospect in which Iran and the US put tensions aside?

The GCC countries have benefited enormously from US-Iran enmity. If Washington and Tehran went beyond a nuclear accord and normalized relations, the GCC might feel they are being left out and are no longer enjoying the status of America’s favored allies in the Gulf.

Can the tangible progress in the nuclear talks signify that the tensions between Iran and the US are not ever-lasting and unsolvable? What is your personal take on that?

A nuclear deal could completely transform U.S.-Iran relations, demonstrating clearly that the two countries can act in concert on a complex and high-priority security issue. After that, anything is possible.

How probable do you find the possibility of cooperation between Iran and the US on the crisis of Da’esh gaining increasing power and advancement in Iraq?

The IS [as we call it] is a very significant security challenge, and requires new thinking about U.S. foreign and military policy in the region. This includes rethinking support for the rebel forces in Syria and, yes, cooperation with Iran.

In what way do you view the approach of the US toward the Iraqi war now?

I have been a severe critic of U.S. policy in Iraq since the run-up to the 2003 war. Options for the U.S. to defeat the IS are very limited now. The conflict should be viewed as a long-term struggle against this form of extremism, and the West and Turkey can help with military equipment and advice, intelligence cooperation, and the like, but little direct military involvement. We also need to rethink our approach to the Syria conflict. Crushing IS is more important than defeating Assad.

Has the US obtained whatever objective it had been seeking in Iraq?

U.S. objectives in Iraq were built on falsehoods and dissembling from the outset. So it’s impossible to answer the question coherently, except to say that the hope for a stable and governable Iraq is in jeopardy.

What would your comment be on President Rouhani’s détente approach?

Many of us in the U.S. have welcomed Rouhani’s approach, which we believe will prove effective in bringing greater stability to the region and will benefit Iran quite directly.

How optimistic are you about the positive impact President Rouhani’s détente approach can leave on Iran-US relations?

Much will depend on the outcome of the nuclear negotiations. Both sides must show more flexibility on the number of centrifuges. I believe a nuclear deal would have clear, if gradual, positive impacts on bilateral relations. I suggest, however, that the IRI be more open to American scholars visiting and interacting with Iranians; this is a small but important element of detente. I have been unable to obtain a visa to visit, for example. Iran does not seem to appreciate who its friends are.

In your recent book, you pointed out the fact that both Iran and the US have developed incorrect images about one another. What would precisely prove such a statement right?

The misperceptions run deeply, and affect nearly all interactions. The U.S. tends to view Iran as deceptive and irrational, which is a longstanding trope of Orientalism. Iran seems to view the U.S. as wanting to dominate Iran and roll back the Revolution. When beginning with these views of each other, it’s difficult to have normal relations. This is the challenge.

Given the increased tensions between the US and Russia, how strong are the chances that a cold war breaks out?

The U.S. and Russia now seem to be working somewhat effectively to contain the violence in eastern Ukraine and realize the situation could get out of control if restraint and productive communications are not pursued. It remains a volatile situation, however, and Moscow and Washington do not control everything that’s occurring on the ground.

How can such outcome influence Iran’s nuclear case?

So far, the difficulties with Russia have not apparently affected the Iran nuclear talks, and of course we hope that continues.

What are the viewpoints of the US about the offensives and attacks Israel has been launching on Gaza in your opinion?

What Israel is doing is precisely the kind of action that radicalizes many Muslims to hate America and the West, and feeds the IS narrative, among others. It’s very destructive. This may be a turning point, however, in US-Israel relations. 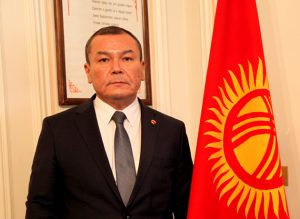